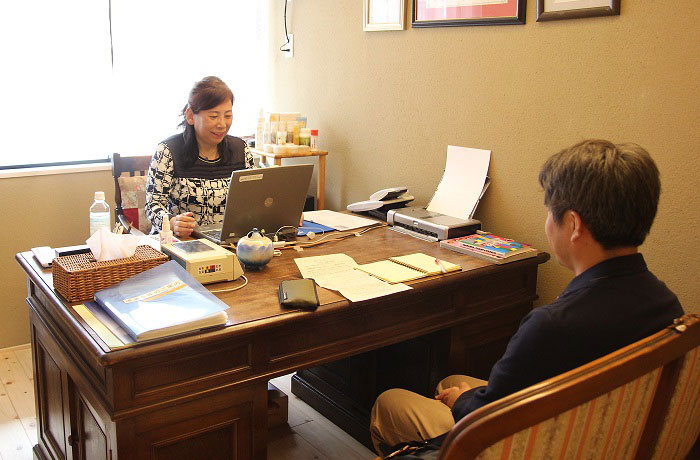 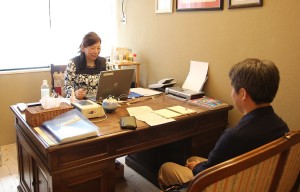 Vexation factors … people who demand without trying it by themselves

Younger brother … Had a heart problem, liver is slightly weak

He went to his mother with excited voice as he could succeed in performing double under first time, but his mother told

him off as his younger brother’s urination was stopped because of his loud voice.

10 years old          He used to go to otolaryngologist for treatments of rhinitis and sinusitis. He was using inhaler.

His mother also suffered from athlete’s foot, which her toe nails were deformed.

25 years old         His stomach was damaged. He took conventional medicines and swallowed gastrocamera.

He was joining a chorus group and used to go out for drink in the late night.

He drank coffee a lot.

He had to have sick leave due to back pain for one week.

He was hospitalized due to stomach ulcer but was diagnosed as stomach cancer after the examination.

Wart and moles on outer corner of the right eye

Body: cold when he was a child, his body temperature was 35 centigrade.

Stiff in his neck and shoulders. Humpback. Back bone is twisted.

Endoscopic photography: Ulcers have left clearly scar behind it. 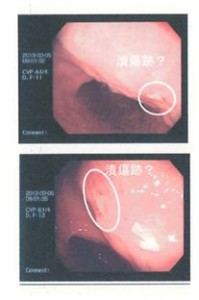 < Dialogue on the first consultation >

Dr Yui (Y) : You were told that it was definitely cancer, weren’t you?

Patient (P) : Yes. The result of tissue examination was cancer. As ulcer was bleeding…

Y: What did your doctor suggest?

P: He suggested, as the ulcer was in middle part of the stomach, if this part needs to be got rid of, whole stomach should be removed or only       one fifth could be remained. Parotid gland was swollen a bit a few days ago.

Y: Were you contracted mumps?

P: No. I was inoculated mumps vaccination when I was 34 years old. We have one child at that time. As we thought if we could not conceive       a second child, it would be a problem. That is why I took the vaccination.

Y: This gives a heavy load on your stomach. You should eat dinner before 9.00pm at latest.

Y: Do you think your body is cold or not?

Y: Did you come in useful for your company?

P: It seems that I am expected.

Y: I thought so. Are you a person who tries to meet expectations from others and work very hard?

Y: How did you learn the attitude which you have to work hard? Was it your father?

P: Yes. My father was the same type. He was relatively working hard.

Y: Your father does not cry or make complains, does he?

P: He rarely cries. If he argued with my mother, he just escaped to his work place. I did not like seeing my parents’ quarrels.

Y: Did they often quarrel?

P: They sometimes did as they tried to insist on themselves.

Y: They persisted in their opinion. I think there are many of such people in your company. What do you think?

Y: What do you think about that?

P: I feel difficult to deal with them.

Y: I assume that you are thinking ‘Why can’t they speak gently in a moral way? People will not follow even if there were angers.’

P: That is correct.

Y: You have a tendency of working quietly. You do not complain even you work double time than others. You have become a person who is       convenient to your company. If you make efforts too much, the stomach will be worn out. So, please relax, and scamp a job. Then,                   please forgive yourself who scamp your job. 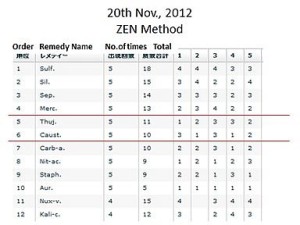 Explanation of the above prescription

Character of Causticum is worse from cold.

This remedy matches with stomach cancer with ulcer.

I combined Psor. and Syph., as Psor. is for epithelial cell and Syph. is for ulcer.

Merc-sol is prescribed for the symptoms, ulcer and parotitis which are currently appeared.

Syphilitic tendency has to be conquered as soon as possible, otherwise bleeding from the stomach cannot be stopped.

He feels good. Pain was reduced.

He can walk and eat.

Dizziness from standing up and after having a bath

Small dried stool like rabbit’s ones. He feels uncompleted when he evacuates the bowels. He has a bowel motion every day, but has a tendency of constipation.

He used to eat meat a lot.

When he ate fish, he had black stool.

Endoscope photograph: Scar of ulcers. Convexoconcave can be clearly seen.

Y: I saw the endoscope photograph and thought folded parts have increased more than before.

Y: Is your doctor saying that your condition has been advanced, is he?

P: Yes, he is. He says that condition has been advanced as long as it is judged from the photograph. It seems there was bleeding from ulcer           in the stomach, as blood was mixed with my stool. I felt dizziness from standing up and was examined and told that was anemia.

Y: How do you feel about your condition? Do you have any uncomfortable feelings or any pains?

P: No. In fact, my pains have been reduced a lot and I am feeling good.

Y: Although your doctor told you that cancer has been advanced, you feel good, right?

Y: Carrots are good to close ulcers, as it contains vitamin A. Vitamin B is also good for closing ulcers. Soy beans and powdered barley                     contain a lot of vitamin B. I also suggest that you go to mountain and nature more often, then being bathed in the morning sun. Please           practice this. Especially please try to absorb morning sun into your irises. This makes you to be cured from a disease better.

P: Thank you very much. 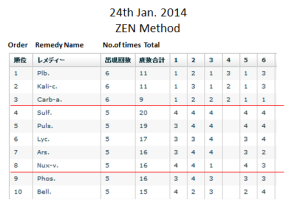 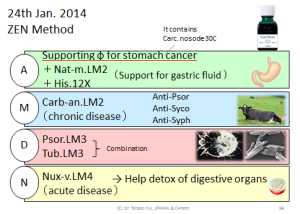 I prescribed Nat-m. as he was lacking of sodium and discharges from his nose (body fluid outside of cells).

Histamin is for allergy from stopping using inhaler which he used to take for a long time.

Carb-an. is good for cancerous ulcers.

Nose and lungs are twin organs.

I prescribed Tub. for the cause of blocking nose. People who suffer from cancer often have blocked nose.

I confirmed that his stomach wall has become smooth from checking endoscope photographs. 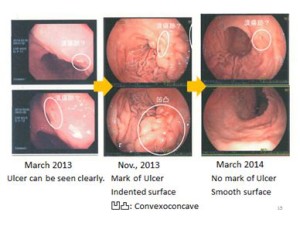 P: Yes. I feel that things are getting well.

Y: That’s right. The condition of stomach wall has been very good comparing to the last time.

Y: You showed me a photograph when there is no fold on the stomach wall at the first consultation. That means the wall is swollen. As it               was swollen, I could see that cancer was staying there. However, the second time it seemed that something started to be shrunk. Your             doctor might have said that the cancer was advanced, I thought ‘Ah, it has started to be shrunk.’ Then, the folds have started to be                       smoothed little by little. In other words, the swollen period is the time when it has a strong tendency of creating cancer, but folds mean         shrinking the tendency. That is why folds were not bad. Caust. and Merc-sol. worked very well. Then, Carb-an. helped to close the ulcers.       They enabled stomach cancer to be improved in such short period of time.

P: That is why I was feeling good.

Y: That’s right. By the way, what are you going to do with your company as you are getting better now?

P: I will keep sick leave until the end of May and start to work again.

Y: As you are getting better, there is no choice but you go back to work, isn’t it?

Y: If you return to your previous life pattern, it might recur. Did you decide how you should do within yourself?

P: Yes. I decided not to overwork. I work with listening to my body. I do not make effort.

Y: You have one more thing to do. It is important to affirm your emotions. When you have an emotion, please introspect yourself. If you             suppress the emotion from moral way such as ‘I should not feel so’, you will have cancer again. So, please affirm the emotion in positive         manner, even it is hatred feeling, grudge feeling or anger feeling.

P: It means that I recognize about my emotion, doesn’t it?

Y: Yes. It means that you accept it. Adults tend to suppress emotions from morals such as ‘I should not feel bad as he/she has a reason.’                ‘Why do I think in this way? That’s not good. Hatred is not good.’ This will create the same result from taking antipyretic when you have        fever. That is why I think it is very important to keep an emotion diary when you have an emotion.

Y: I thought that showing emotion or talking real intention had not been quite allowed in your family while I was talking with you. Is it                correct?

P: Well, I was told that a boy should not be so talkative.

P: Yes, that is correct. I have been suppressing such emotions, too.

Y: See. If so, you cannot empathize. You are feeling something, but do not share in the end. Impressions and sufferings are the same. You          do not tell that you were suffering. You stopped talking as that was a rule in your family. You swallowed many emotions. You swallowed        them deep into your stomach passing your throat. I told you that ‘You worked too much, didn’t you?’ you often replied me ‘Well, it was            average.’ However I wondered if it was really so. I have been seen another gentlemen who suffered from stomach cancer. Many of them        were just working desperately without moaning. If your ability was 100, you worked at 120 levels. So, you may not feel so, I think you              have been working very hard. That is why it will be a very important point that you listen to your body and tell yourself not to make                  effort. Especially, I would like you to remember when you were told off about being talkative.

P: I remember one memory now.

Y: But you were very happy as you could succeed in performing double under, weren’t you? You experienced that you were told off when             you expressed your happy feeling, so you started to leave your feeling for a while, but if you leave it for a while, the feeling will be past.               The feeling becomes flat. I think you swallowed many emotions such as I should not say this in this situation, and so on. I think it would         be good if you keep remembering such situations more and more. I also think it will be the most important point that you flatter yourself       that you have a great healing ability. Please try to express your feelings without putting it down to stomach from your heart.

P: I understand. Thank you very much.

Remarks on the prescription

Carb-an. is very good for stomach problems, stomach ulcers and stomach cancer. It sometimes brings back a memory which you forgot about your childhood.

As of 4 July 2014, he has achieved full rehabilitation.

He has now returned to work and is working not so hard as before.

A patient starts to live him/herself after their immunity was increased by remedies and they were cured from a disease. I observed that Carb-an. specializes stomach cancer. I also recommended him not to work more than he can for the sake of his company. In other word, I recommended him to heal his inner child. I would like him to cry or moan even he is male. As fever is grateful to eliminate body wastes, any welled up emotions are grateful to eliminate.